https://www.summitpost.org/phpBB3/personal-websites-t71571-615.html     - New Page on Personal Websites in the General Section of  of Summitpost's Forum 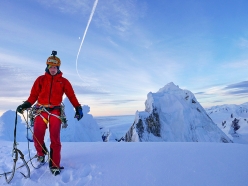 We weren't planning on leaving. It was spontaneous. A short exchange of sentences with sławek szlagowskim and tickets were "girls". after nearly 8 years I return to piaskowcowego paradise in wadi rum in Jordan. I move old pictures, memories come back, and hands start to sweat.
This time thanks to super cheap tickets to ejlatu in Israel travel to the heart of the desert takes one day and does not cost fortune. We're crossing the border with Jordan and a taxi cab cut into the heart of desert climbing - wadi rum. Years ago, I remember the lively rest of rest haus and inclusive dinner at Ali's. Unfortunately, it's just a story in the pictures. Rest Haus Slumped. Camping devastated, and Ali's shop and diner are gone.
Now accommodation in wadi rum offers local guides in their homes. At the expense of peace and quiet in rest, we go under "care" of Ahmed and his wife iman. We take a separate room, and we share the bathroom with homies. We've been walled up from the outside world, unfortunately we hear the life of the village Barking dogs in the middle of the night interfere with calls for prayer coming from a nearby mosque. The Horn of the morning bus collecting passengers all over the village means 6 a.m. Then our dream can only disrupt the sound of the school's neighbouring.
A quick breakfast prepared by Ahmed's wife and we're going to climb, feel the touch of rough sandstone under sweaty fingers. It takes half an hour to get to the wall. On the way, we pass the ruins of the old nabatejskiej temple and stand under a 450-foot wall Most roads are kilkuwyciągowe roads on their own belay with permanent positions positions. Some of them continue until the end of the wall, and there are already serious challenges facing major difficulties.
As a result, in different configurations, I 4 roads:
- " Gold finger " I " the rumors of rain " Z Marta Wrzask
-"Merlin" with piotrkiem pilecki
- "the beauty" with Barb and sławek szlagowskimi
I've done some of these roads before, but I like to climb a cool rock, and the fact that I don't have a way of repeating roads doesn't
Another challenge to which we were approached was the trawersowanie massif of rum from west to east. Difficulties Difficulties, but without prior knowledge of the road, such a transition becomes a big mountain adventure, especially as you are still looking for dear zejściowej and astray

:). Trudy's constant search of the road compensates for a great night at the top.
The weather has not failed and throughout our stay-10 days-not dropping one drop of rain. TEMPERATURES AROUND 25 degrees, so in the southern walls we searched for every inch of shadow. All of our tour has closed a visit to ancient Petra, but that's a different story.