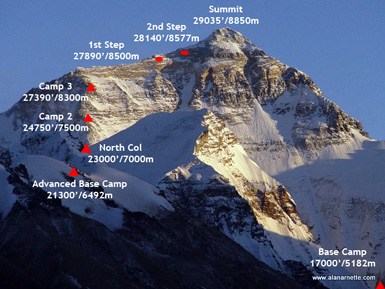 
An early start today for our first foray in to the Khumbu Icefall.


The other day we did a rope work session and this morning we put it all in to context. We convened for breakfast at 04:30 and left Base Camp shortly after 5. It was a superb morning with a starry starry sky and we could see a trail of head torches heading through to Camp 1. It didn’t look to be particularly busy.


We headed to the start of the route (only 5 mins from where we’re camped) and meandered though the ice maze following bamboo wands that mark the course.

After about half an hour we got to ‘crampon point’ - beyond here the glacier is steeper and icier and it would be very easy to slip on the frozen surface.
About half an hour later we reached the beginning of the ropes - these are put in place to allow us to clip in and be secured to the mountainside. There are places where the terrain is very benign and we can walk along quite nonchalantly and there are other areas where the consequences of even a simple slip or stumble are very serious ... in which case we tune in, watch the footwork and make sure that we are being double safe with the use of our karabiners.
We can get up a lot of the slopes reasonably easily with deft footwork and the occasional pull on the rope with a gloved hand. It’s amazing what angles can be tackled very simply and efficiently. There are other sections, however, where that technique would be inappropriate and we use a rope clamp (jumar) to make sure we can’t slide back down to the last anchor.
We eventually got to the first ladders and these were negotiated with ease on account of them being up against steep walls. Next up were the horizontal ladders - these were the ones we were hoping to get to practise on.
Each horizontal crossing has a rope anchored on either side of the ladder. We clip in to both ropes using ours ‘cowstails’ (a rope lanyard with a karabiner at each end) and hope for some assistance from behind (or in front). The second person pulls the ropes taut giving a couple of flimsy handrails for the first person to use for some extra balance. The first person steps on to the ladder and, without looking down in to the crevasse, walks / teeters / stumbles across the ladder. On reaching the other side they then lean forward and create tension for the second person to follow.
Repeat as necessary.
Everyone seemed to get the hang of it and, seeing as we were at 5,850m and the sun was now upon us, we called it a day and headed back to Base Camp.
All in all a 5 to 5.5 hour round trip that gave us an insight in to what’s required for our first rotation to Camp 1 in a couple of days’ time.
Next time we’ll be starting earlier, travelling for longer and carrying more as we go camping on the hill for 3 nights - our first acclimatisation rotation.
The only thing to add is that the route is perhaps the best and safest I’ve seen so a big shout to the Icefall Doctors for creating a safe passage. Thanks guys.
====================================================================