Everest 2017 - How to manage the Everest crowds - report by Alan Arnette on his blog
Everest 2017 - Over penitentes and narrow snow bridges - report by Stefan Nestler
Spanish Climbers on Denali in search of new lines - Barrabes.com
Iron to Baldy Traverse - May 6 - 10,400 ft gain with the Meetup group - Coachella Valley 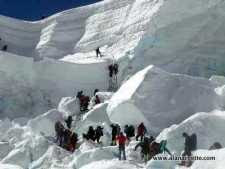 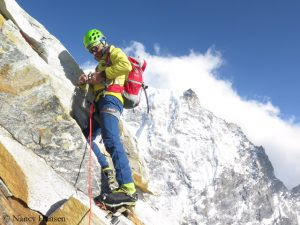 http://www.barrabes.com/actualidad/noticias/2-10002/manu-cordova-iker-madoz-eduardo.html -- Spanish climbers on Denali in search of lines
Manu Cordova, Eduardo Gonzalez and Iker Madoz depart next April 28 to Alaska, specifically the Denali or McKinley massif (6190m). They are very open minded; Is a mountain where conditions and snow conditions make any decision: "Yes we have something clear, which is acclimatizing in the West Buttress up to the top (normal route). Then, the main idea is to climb some of the great routes of the South face. There are some more classic, such as the Arista Cassin, or routes of high difficulty, very long and committed, with few repetitions, such as the Slovak Direct. But the decision will be made there. " Part of their caution comes from the lack of experience they have in Alaska: " As always, The first time in a place you have to be cautious and go with an open mind and eager to learn the details of the place, " says Manu. They expect to stay 3 weeks on the glacier. They will inform as soon as their objective is clarified.

Yet another Death Valley exploration trip again. This time it would also included an unknown ski descent as well as two "First Descent" canyons. Our group ascended Telescope Peak in the snow & ice with crampons and ice axes, and after reaching the summit, Mark Angelos put on his skis and headed down the first known ski descent of the West side of Telescope Peak. The team included Mark, Aysel Gezik, Norma Ryan, Haykel Hadjsaid, Leann Lockwood & myself .The total descent from the summit was going to be a 10,000 foot descent down to the Panamint Valley floor at the 1000' level after starting at over 11,000 feet. After skiing down below the 9000' level level when the snow started ending, and at the first dry-fall we came to. Then we would start going into the unknown canyons below for a technical First Descent down two different canyons before we reached the bottom. After one canyon, we ascended back up and traversed over to another new canyon. After we ran out of daylight, and descending down the unknown technical terrain and it becoming dangerous , so we ended up doing an unplanned bivy with no gear, water or food. We just laid down in the dirt on the windswept ridge, just with the clothes we were carrying, until daylight. Everyone was freezing. And now we had to continue down the final unknown canyon to the valley floor without any water for food. It was quite a epic trip.

And I am working on the two albums for the canyons now and will post them this week when all the photos are in from the team. And all this will be put in Ropewiki for beta for future canyoneering trips for those who would like to go there.
Here are a few sample photos as a preview - the FB albums & Trip report will have the full details later this week