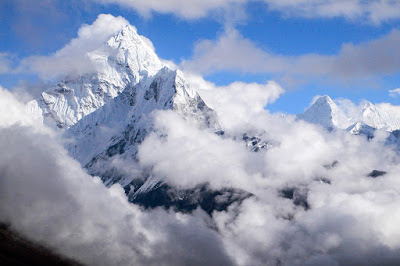 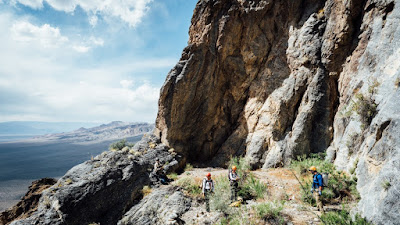 Yet another Death Valley exploration trip again. This time it would also included an unknown ski descent as well as two "First Descent" canyons. Our group ascended Telescope Peak in the snow & ice with crampons and ice axes, and after reaching the summit, Mark Angelos put on his skis and headed down the first known ski descent of the West side of Telescope Peak. The team included Mark, Aysel Gezik, Norma Ryan, Haykel Hadjsaid, Leann Lockwood & myself .The total descent from the summit was going to be a 10,000 foot descent down to the Panamint Valley floor at the 1000' level after starting at over 11,000 feet. After skiing down below the 9000' level level when the snow started ending, and at the first dry-fall we came to, time for skiing ended and time for technical canyoneering to begin. Then we would start going into the unknown canyons below for a technical First Descent down two different canyons before we reached the bottom. After one canyon, we ascended back up and traversed over to another new canyon. After we ran out of daylight, and descending down the unknown technical terrain and it was becoming dangerous, so we ended up doing an unplanned bivy with no gear, water or food. We just laid down in the dirt on the windswept ridge, just with the clothes we were carrying, until daylight. Everyone was freezing sleeping out in the open without any cover.. And now we had to continue down the final unknown canyon to the valley floor without any water for food. It was quite a epic trip.


And I am working on the two albums for the canyons now and will post them this week when all the photos are in from the team. And all this will be put in Ropewiki for beta for future canyoneering trips for those who would like to go there.