http://www.barrabes.com/actualidad/noticias/2-10142/juan-diego-amador-david-perez.html -- Juan Diego Amador y David Perez, 6000 virgen: Pico Islas Canarias in the Indian Himalayas
So with a sketch made a few years ago by a Japanese climber and a few photos and testimonies, both reached at 4,700m the base of a wall of almost a thousand meters that ended in a virgin summit, and there they set up their camp. But things were not going to be so easy: a large wet front kept them from activity for two long weeks. In a normal year, the monsoon had already been withdrawn from the area, displaced by the dry and cold northern continental winds of Tibet and Central Asia, but this has not been the case.
The obligatory break made them take the decision of an alpine attack, which they calculated they could do in about 10-15 hours until summit. They left at 3:00 am, and during the first hours, they found quality ice that allowed them to climb safely. The situation changed as they reached the highlands, with black ice that slowed them down: "When we reached the mixed zone we were off the best schedule and we had the most exposed section ahead. At this moment David took the initiative and decided to lead the longs of mixed, because it is a field in which he performs better than I. "
The mixed zone was very exposed, with granite blocks, thin ice sheets and snow without cohesion , with difficulties to protect."Even so, we were able to do a good job in that section, and we managed to climb with a lot of guarantees," says David Perez.
But time passed, and it was already 16:00 when they left the mixed zone. They deliberated, and decided to continue. "It would not be the first time we slept in an ice cave. Our only concern was not to lower the temperatures too much. "At
7:30 p.m., they arrived under the last wall, in a difficult section to secure and with virgin snow down to the knee. They acceded to the last section, an unknown one since from the base field it was not seen. They overcame seracs at night until at 8:30 p.m. they reached the virgin mountain summit at 6025m altitude, 17 hours after leaving their camp.
With a long night ahead, they decided to bivouack a few meters below the summit. A hard night, with temperatures of -15ºC and a continuous snowfall. For Juan Diego Amador, "it has been the hardest bivouac in my life. But finally we stayed at 6,025m in the open with really low temperature. Every 20 minutes we would get up and walk a bit to clear up and avoid frostbite. Until 6:00 am dawn . "
They had a long descent ahead. With the mountain loaded with snow, they could find no safe alternative. They decided to descend the first few meters by the final edge of the previous day, and were able to take advantage of channels of compact rock to go abseiling. It kept snowing, which caused that in the end part they began to fall small purges of snow."Fortunately, some wind was blowing and the mountain was slowly unloading. Even so, we provoked some signs of plaque that did not go through a good scare. "
At 20:25, after 43 hours of activity, they arrived at the store, exhausted but happy. 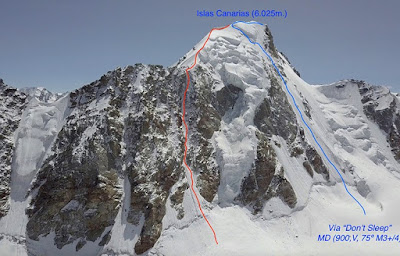 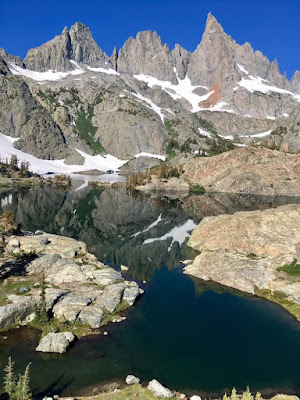 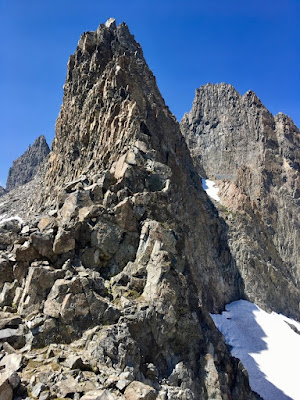