http://www.alpinist.com/doc/web17c/newswire-first-ascent-marooned-at-midnight  --  Alabamans "Marooned at Midnight" for first ascent of an unclimbed wall on Baffin Island 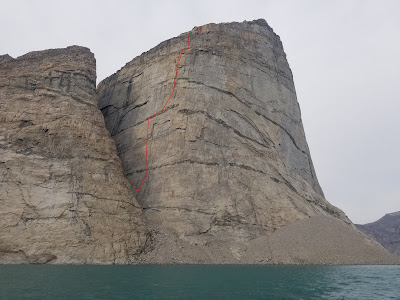 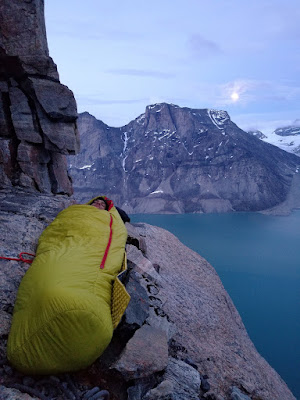 http://www.montagna.tv/cms/112529/due-cime-vergini-in-karakorum-per-i-cileni-ma-i-polacchi-correggono/    --  Two virgin peaks in the Karakorum for Chileans 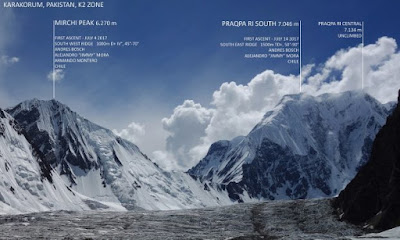 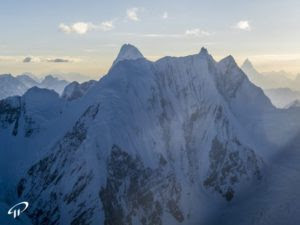 On 16 August, three climbers in Chile, Andres Bosch, Armando Montero and Alejandro "Jimmy" Mora, announced that they had climbed two virgin summits in Karakorum: the lowest summit, a six thousand, baptized Mirchi Peak and the other, a seven thousand, called Praqpa Ri South. Both mountains are located between the Khalkhal and Savoy glaciers, close to Broad Peak and K2. It is interesting to note that for many years these peaks have not attracted the attention of Himalayan mountaineering, despite the fact that the exploration of seven thousand unspoiled Karakorum continues uninterruptedly.
But the Polish fleet is Polish: Janusz Majer, topography expert of the highest mountains in the world, has always been working to find new unexplored peaks, and asked by Wspinanie,  he said:
The Three Peaks of Praqa Ri. Photo @Piotr Tomala"The southernmost tip of the Praqa Ri, climbed by Chilean climbers, is actually a southeast spike of 7046 m. The mountain has three similar peaks. This is a good end to the exploration, though not very difficult. It is interesting to note that until now, a mountain near Broad Peak and K2, and clearly visible from their slopes, remained out of the interest of Himalayan mountaineering. The other two peaks remain inviolate and probably sooner or later they will be conquered. With regard to the peak called Mirchi Peak from the Chileans, a mountain probably climbed in the 1980s. "
The fact that the Chileans have first come up with the Praqa Ri therefore remains without doubt. This is not the case for the second mountain. It seems that the Mirchi Peak had already climbed many years ago in 1983. According to the Journal of Alpinists in 1984, the top of 6270 m was reached by the first Dutch explorers Gerard van Sprang and Ronald Naar, who came to the top in the occasion of the conquest of the Broad Peak. The top, then called BK 12, has also appeared in guides and literature at Khalkhal Ri West. Apparently Chilean climbers did not know about this ascent. Regardless of the error, the two peaks are really important, especially if we consider that this is the debut in the region of this young group. During their brief nine-day visit to Karakorum, Khalkhal Ri West (and although they were not the first, they did not have much information on this mountain) and opened a new road to the pristine Praqpa Ri South (7046m ). The difficulties of the road were graded by Bosh and Mora as TD + M3, 50-90 °, 1500 m.

http://www.barrabes.com/actualidad/noticias/2-10127/nuevas-aperturas-cordilleras-central-pariacaca.html  --  New openings in the Cordilleras Central and Pariacaca, Peru 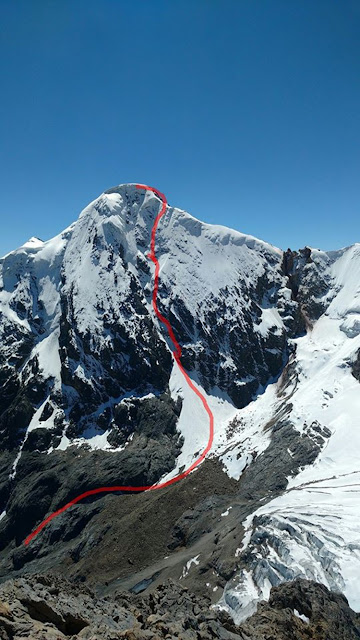 As a complement to the usual report of activities of the season in the Cordillera Blanca and Huayhuash of our usual collaborator Sergio Ramírez, of the company of guides Our Mountain, of Huaraz, and that you could read last month, we published these 3 new openings in two Cordilleras very unknown in Peru, but with enormous potential.

Sergio Ramírez
www.nuestramontana.com
Source of information and personal conversations: Víctor Rímac, Pablo Laumman, Marco Jurado It is no secret that Peru possesses an impressive number of mountain ranges that form, of course, the well-known Cordilleras Blanca and Huayhuash, although some important "cordilleras" located near Lima or Huancayo are almost unknown; that although they do not have the infrastructure that has Huaraz, in them you can still perceive the real sense of the expeditions of yesteryear, adding to it the impressive amount of possibilities of climbing and aperturistas in many flanks with difficulties of all level and an important number of snowfall that make up all these little masses still explored. The following is a report of 3 promotions in remote areas of the Peruvian Andes.