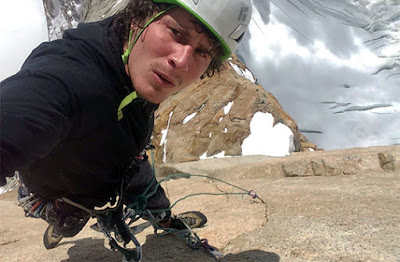 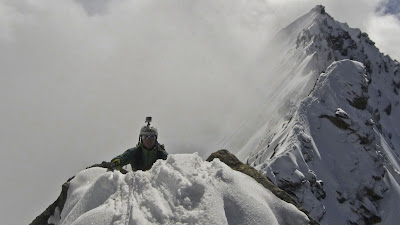 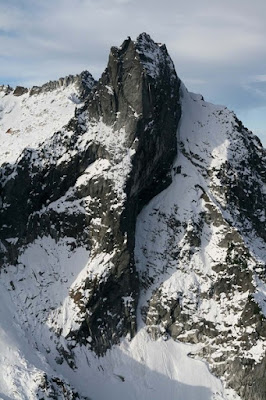 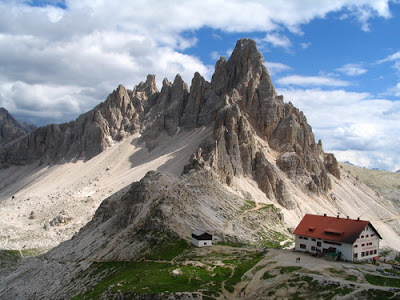 What follows is the story of the lonely winter make Marc-Andre LeclercDe La Torre Egger. Thursday was until Friday niponino and moved his tent to the foot of the path, and devoted himself to dry the team and get some rest. Started climbing for a variant of 300 metres to the right of the line of Italy, following after the line "Winter" to come together to Titanic at half height.

On Saturday I started climbing at 2:45 am, opting for a runner up just below the serac. Rapid Progress by hard snow and ice easy with a mixed section in a chimney close right before we get to the line. This is the first and only time in my life that I have climbed under a serac.

In the headwall escale mostly without a rope, except the crossing just before the ramp. In this section, get my backpack, which made me lose some time because it's hooked several times. The escalation in the headwall is very good, with several cracks of fingers and a fireplace full of ice that I made in climbing shoes but using an ice axe. Where it begins the journey to the right I went back to put the boots and shoes, and climb with the backpack on. Climbing without a rope, pass the point that he had achieved in my previous attempt.

The chimney that was still in good condition, with good ice, and I climbed up a section in slippers right before the slopes of snow that lead to the mushrooms cumbreros. Here I found a step of rock covered with frost in which I'm sure artificial, doing with my piolets planted in ice on the bottom in a fissure wide collapsed. This section, albeit short, I was pretty serious. To reach the "Tube" of ice which leads to the south face, lower passage with the rope and I made another couple of steps of artificial.

Reach the summit at 6 PM, but I don't have too much longer because I had a lot of wind. Desescalé last long and then rapelé a more direct line to avoid having to repeat the sections in crossing. One of the rapeles it myself, but the rest of the descent was well and reach the glacier at 11 pm."

Yours is the second winter ascent of the Torre Egger (Dani Arnold, Thomas senf and Stefan Siegrist made the first in 2010), it is the first lonely in the winter, and this is the second lonely ever (the first made her Colin Haley at beginning of 2016). WITH THIS ASCENSION MARC-André finishes his project of climbing in just the three main peaks of the group of the cerro torre. In the beginning of 2015 he made a quick ascent of the "Corkscrew shaped" in the cerro torre, by far the hardest track in only in climbing that mountain. A year ago made in free-just tomahawk to the needle in the exocet standhardt, a line very supported. Chose to purpose lines which had not been climbing in alone. Closes his story saying " that happiness to have a few days of rest," a break more than deserved no doubt.

Below is Marc-André Leclerc's account of his solo winter ascent of Torre Egger. On Thursday he walked up the Torre Valley and camped at Niponino, then on Friday he had a casual day moving camp to the glacier below the route, drying the stashed gear and relaxing. He started up by climbing 300 meters of new terrain right of the Italian line, then followed the “Winter link-up” line to join Titanic at half height.

“Saturday I began climbing around 2:45AM. I opted to climb the Scottish style gully threatened by the serac. Icefall had swept this clean and progress was fast on neve and water ice consistent in the WI3 range with a good mixed section in a narrow chimney before joining the established route. This is the first and only time I have ever climbed below a serac.

I belayed a long mixed pitch (M5 A1) to gain easier terrain and the hanging glacier where I took a short break. Above this, I belayed a 15m pitch on a very fragile column of ice that require me to aid off of an ice screw to avoid knocking it down. I continued easily above this to reach along pitch of 5.10+ which I belayed with frozen hands to reach the snow arête and base of the headwall.

On the headwall, I free soloed the majority of the climbing aside from the traversing section that joins the ramps. I hauled my pack, but it got caught a few times which cost me time. The climbing on the headwall was very good with many exposed finger cracks and a chimney flare with ice in the back that I climbed in rock shoes with one ice tool.

Where the line begins to traverse right, I changed back into boots and crampons and climbed with my pack on, free soloing this wildly exposed section quite rapidly and passing my high point from my first attempt.

The chimney pitch above was in decent conditions, with solid ice, and above this an excellent stemming groove (climbed in rock shoes) gained the start of the upper snow and mushrooms section.

There was a heavily rimed rock step that I back looped, and I resorted to aiding off my tools placed in ice in the back of an overhanging off width. This felt quite serious although short lived. Above this I made a tension traverse and two aid moves to gain the 'ice tube' that leads to the south side of the mushroom and the summit which I reached at 6pm.

There was a lot of wind on the summit and I did not linger for long. I downclimbed the last pitch then rappelled straight down and directly off the edge of the headwall from v-threads which allowed me to avoid the traversing section of the route itself. One stuck rappel cost me time, but after that things went smoothly and I arrived at my tent at 11pm.”

Marc-André's is the second winter ascent of Torre Egger (the first was done by Dani Arnold, Thomas Senf and Stefan Siegrist in 2010), the first solo ascent in winter and only the second solo ascent ever (the first was done by Colin Haley in early 2016). With this ascent Marc-André finishes his project of soloing the three main summits in the Cerro Torre group. In early 2015, he did a very fast solo of the Corkscrew link-up on Cerro Torre, by far the hardest route ever soloed on that peak. A year ago he free-soloed the very sustained link-up of Tomahawk to Exocet on Aguja Standhardt, barely one day after the winter equinox, narrowly missing the “winter ascent.” He specifically choose routes that had not yet been soloed, explaining that this helped keep him motivated and excited as he planned things. He closes his account by writing “I am quite psyched and ready to take it easy for a few days!” That is a very well deserved rest.